Like Bali, Banda Aceh has a distinct personality that you can grasp far quicker than you can Jakarta’s.  The similarities end there, however.  A professor from the Islamic University, where we visited Thursday, said it best: “here in Aceh we are always in conflict.” Before the 2004 tsunami, the region was torn by the GAM rebels (which we have been cautioned to refer to as “combatants”), and now as the last NGOs pull out of the region, the new implementation of sharia law has begun a national debate about religion and human rights. 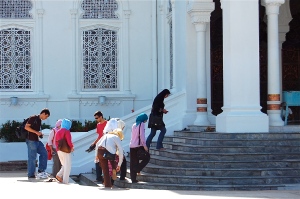 Globalist reporters cover their heads and uncover their feet for entrance into Banda Aceh's Grand Mosque.

Sightseeing of the city is sightseeing of these conflicts. When we arrived last Wednesday, we women donned hijabs and long sleeves for our first entrance into an official “Muslim Dress Area” and later visited two ships that the tsunami waters had carried onto land. Beside the second, a massive tanker was a small photo memorial to those killed in the disaster.  It was a whitewashed wall with maps and diagrams that flanked a central niche in which around a hundred more-unsettling photos were compiled.  These photos had been taken in the days immediately after the water receded. They contained bodies and body bags. They were unedited for graphic content.

After sitting and saying nothing as a group for the first real time on this trip, we got into a discussion about the purpose and ethics of photography in situations like these. There was disgust that someone even took a photograph when that many seconds of some kind of helping was the alternative.  There was appreciation that someone took a photo in that situation because of that much more it might encourage aid organizations.  But did they even see these photos? We had not seen them before. Who saw them at the time, and what were the motivations of photographers?

The photographs were neither captioned nor given acknowledgements, so we did not know if they were taken by the Acehnese or by visiting aid workers or the media.

Is it acceptable to enter a post-disaster situation only to photograph? Social critic Susan Sontag says that “all images that display the violation of an attractive body are, to a certain degree, pornographic.”  This comment is from Regarding the Pain of Others, which deals largely with war photography; it is important to note the differences between that, post-disaster photography, and the general aestheticizing of poverty that sometimes occurs when the wealthier enter a less wealthy area (see: slum tourism). Still, photographs of carnage after a storm carry the same weight as those on a battlefield in a sense that the photographer is choosing to make an event of this tragedy as opposed to everyday tragedy.

Then comes the question of whether to publish the photographs, and if so, where.  Should coverage of the tsunami on the front page of the New York Times begin with one of these photos? Should they be available by a simple keyword search on the Internet? I think it’s important for them to be available to the part of the public who wants to seek them out, and perhaps that means going to this ship site or the nearby tsunami museum in Banda Aceh itself. As helpful as Internet archiving would be, I think the images should be somehow protected for disturbing content.

I hope that the photos were snapped by a frantic worker at the end of the day, a last decision before he or she went home.  Of course there are many reasons for taking a photograph, but we need to be careful when the beautiful and the horrible or the horrible and the purposeful overlap.